Hello everyone! Lynn has graciously invited me to do a guest blog and I’ve been really excited to share some words with you! I’m a relatively new author so this is a fun opportunity for me.

Languages have always been an interesting subject to me. I love learning about the subtleties, differences, and similarities. I’ve traveled to a lot of countries and the most interesting thing I’ve learned is that, no matter the language or how many or few ways we say ‘I love you,’ the language of love is universal. No matter where you’re from, the idea of being in love is one of our human constructs that is understood universally.

In how many languages can you say the phrase, ‘I love you?’ 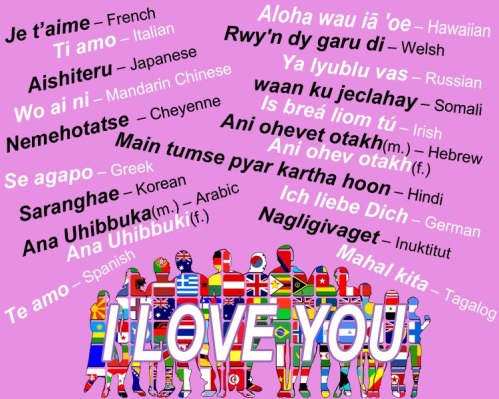 How many times do you say it in your native language? Can it ever be said enough? Shouldn’t it be said more? If it’s said in one language does it mean more – or less – than in another language? Of course not. It’s ridiculous to think it would.

Yet, most of the non-English phrases listed are ONLY said to those the speaker loves intimately. For all other types of ‘I love you,’ there are other words or sayings. In English ‘I love you’ is said for most all forms of love from familial and friendships to intimate and devotional. To express intimate love in English we may say we are ‘in love’ with a person. (‘In,’ as in ‘intimate?’ Interesting thought and subtlety…). Some languages have masculine and feminine specific ways of saying ‘I love you.’ For example, in Hebrew, you would say ani ohev otakh only to a woman. The Greeks have eight words for love and the word erotica comes from the Greek word éros, the sensual sexual type of love. In Italian Ti viglio bene (I love you) is said to people you may love, but are not in love with – like a child or friend… or a girlfriend you are not ready to say Ti amo to, yet.

I use both of the Italian forms of I love you in my Salvaggio’s Light serial. Rafaella Salvaggio, the MC, goes by the nickname Rafe (Rah-fay.) She is the daughter of an American mother and an Italian father and was raised, until the age of twelve, in Italy. After her mother’s death, her father moved them to America for a new life and to expand his business. The first book, Shattered Paradise (.99 on Amazon, Free on KU), picks up her story at a significant turning point in her life. She has been separated from her partner, Eden Kingsley, for about eight months. Their relationship ended after the birth of their daughter, Bronte, and had been on rocky ground well before that time. In the hopes they could at least get along for their daughter’s sake they agreed to go on a trip with family and friends. The vacation was intended to be a part vacation and part celebration of Bronte’s first birthday. This is the first significant time they have all been together and things do not go well. As the Salvaggio’s Light books progress the past unfolds, revealing the life story of Rafaella Salvaggio and the secrets of her past that she is keeping – secrets that have a direct link to her current troubles.

There are quite a few characters in the Salvaggio’s Light serial and they each have a specific role to play in order to pull the story together. Eden Kingsley, Rafe’s ex-partner, is newly engaged and keeping a secret that could endanger her and her daughter Bronte. Julia Hawthorn, Rafe’s childhood friend, is wealthy, lonely, and still dealing with her long-held feelings for Rafe. Abby Van Falkov, one of the first friends Rafe made after moving to California from New York, is trying to keep the peace and protect her friends with the help of the rest of the gang. They all have interesting experiences with Rafe but none are privy to her secrets. They all develop and grow over the story in ways that are sometimes distressing or frustrating and other times hilarious or uplifting. I felt they are true to who they are and their ways of handling problems and conflict are consistent with how a real person might act. That is probably what makes them so maddening at times!

I like to write stories that make the reader get so involved they experience an array of emotions. I’ve been told this was a success! I have received a lot of emails from people upset and talking to me like the characters are real people… it’s kind of weird – but I’m weird, so I enjoy talking with them and helping them resolve the issues they have. I usually tell people to pace themselves while reading the series so they don’t become emotionally overwhelmed. It was not meant to be read back to back, though some can do it without problems. Like a mini-series, you need at least a weekly break between episodes.

Transcendent Love is something I tackled in my paranormal romance Cursed Hearts. It is a love story transcending time and gender. I was exploring the notion that true love can last forever…of course, a demon may have to be involved! Rowan has been searching through time, incarnated as both men and women she has held many names. The two souls were separated by a gift from a bored demon on All Hallows Eve. Over time, the gift became a curse and a game for the demons. After looking for years, Rowan meets Molly once again and now, connected by the power of love, the two souls must fight the demons in order to finally have a life together.

Will love prevail? Will they finally be able to live together again for a lifetime? They have one night to figure out the riddle and get it right to break the curse.

I hope you take the time to learn how to say ‘I love you’ in a language other than the one you speak. There are lots of ways to hear how the words are said on Google and YouTube so take a listen some time. Of course, make sure, if you use the phrases listed, that you are appropriate and say it to the proper person… you don’t want to tell someone you are in love with them when you just love their fashion sense!

Also, enjoy my short story The Secret Sappho Society & When Harlow Graves Popped Her Con-Cherry. It’s FREE on Amazon. It is a humorous tale about being a lesbian fiction author with a bit of a mystery.

Remember, no matter our differences, we all have in common the fact that we are human. As humankind, it should be our primary intention to be kind to all humans. 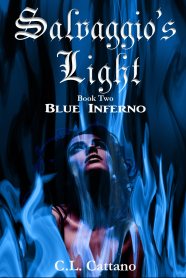 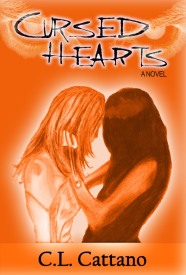 I want to thank CL Cattano for her share. Her books are on Amazon for you to purchase. Be sure to stop by next week when author Addison Conley will be our guest blogger.