Good afternoon, Friends and welcome. It was great to see you all last week to meet author, Bonnie James. Today I’m am sharing something new.

How many of you out there play video games? I have been a Tomb Raider fan for many years now and I just love the games and the protagonist, Lara Croft. It is interesting to note that as a child I didn’t play video games. It wasn’t until I was older that I became interested in the Harry Potter games, having played the first three many times. I played on my computer and used the keyboard and mouse to control my characters. I later switched over to a PlayStation and Xbox controller.

I met Lara Croft the first time I saw the movie, Lara Croft Tombraider in 2001. However, my relationship with the games didn’t begin until 2007 when I purchased Tomb Raider Anniversary, a remake of the first game. As I played I loved how I could move the character and the adventures she led me on. I was soon addicted and with excitement played the game until I got stuck in one level that I needed some help with, from others who are part of a fan-based Tomb Raider forum (https://www.tombraiderforums.com/.) They have helped me out on many occasions as has a woman named Stella who owns and operates her extensive Tombraider website: https://tombraiders.net/ 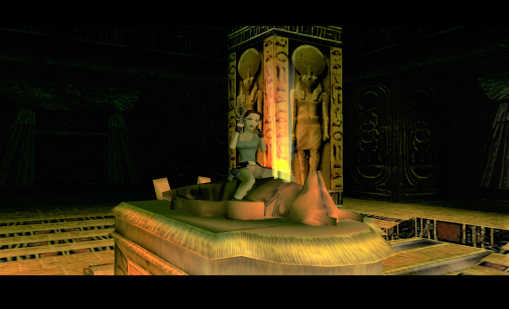 Lara Croft is an interesting woman. She has been all over the world and knows a lot about the places she is exploring. She is very intelligent, is quick-study and is fast with her defense.

It is amazing the intense acrobatic acts she performs during the games; usually reserved for trained professionals.  She does things like scale-up vertical walls, wall run, and jump and grab onto a jagged wall. Not to mention fight off an eel during a long underwater run.

On her ventures, she uses various tools to help her, including a climbing pickaxe, a grapple and rope arrows. With these, she is able to get into the most remote areas.

Lara is fearless and can take on the most dangerous enemies, including wild lynx and men with fully automatic weapons. Her arsenal includes the desert eagle, a rifle, and uzis. In the earlier games, she had her signature dual pistols, not included in the last three games. Many times during the games she has her weapons confiscated, but she is always able to rebound and get armored again. 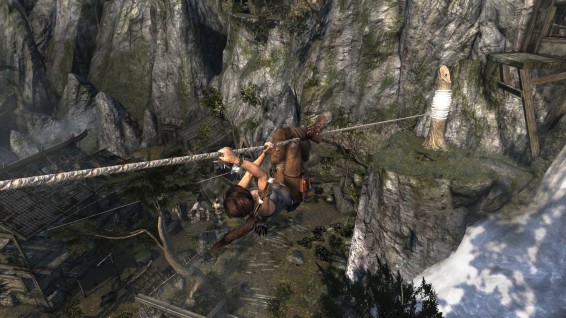 The first Tombraider game debuted in 1996 created by Core Design. The graphics are simple, but the games are not. They involve a lot of hard jumps and combat. There are also many timed runs and puzzles, some of which are underwater. She gets to drive vehicles like a quad bike and a mine cart. Core created six games and they were originally meant to be played with the keyboard. I use a PlayStation controller with these early games and have found it easy to map the keys to it. It is easier to play.

In 2006 a new generation of games debuted by the creator Eidos. Here the graphics are much smoother and they can be played with a game controller. Unlike the earlier games, the movements are more flowing and it is easier to control the character, Lara. There is a lot of combat and more puzzles and you get to drive a motorcycle, which I found to be challenging.

One of the games I like is Tomb Raider Anniversary. My favorite level in this installment is St. Francis Folly. Here she gets to go to a place that has water. The music that is played is so serene and I felt the same as I was playing it.

In 2013 Square Enix launched a reboot of the series called Tombraider. These games are very crystal clear and the graphics are unbelievable. There is even more combat, harder puzzles and in one game you get to use climbing gear to climb on the ceiling of a cave. You also get to fight off enemies while solving a puzzle in a challenge tomb which took me more than a few times to get through, but I did.

The future of Tomb Raider is undecided. I find my resources at  https://www.tombraiderforums.com. There are rumors going around regarding a new game, but nothing has been confirmed. I’m really hoping for a game to come out in 2021 for the 25th anniversary of the franchise. We shall see.

Thank you for stopping by today. Be sure to visit next week when author Chris Paynter will be my guest.

Lynn Lawler is a writer whose fictional stories reflect women’s everyday lives. Her plots include themes about the unknown, mysterious, and mystical. The diverse characters show us that we are all the same on the inside. Originally from Michigan, she traveled to Arizona at the start of her spiritual journey. While there, she worked in an outdoor market and a food co-op. She also studied Reiki and Theta DNA™. As her characters face life-changing events, they come to life by awakening to the spiritual truth about themselves. At the same time, the players must endure extreme challenges that deepen their character. She is the owner of Lynn Lawler’s Creative Artists Blog, a site where she presents book reviews in various genres, including speculative fiction, fantasy, and romance. You can find author news and guest blogs at www.lynnlawler.blog. Her interests include meditation, helping the homeless, gaming, watching baseball, and playing chess. She lives at her home with her wife and cats in Southern California. Currently, she is working on another adventure. For news and updates, go to www.lynnlawlerbooks.com. View all posts by Lynn Lawler