Good Afternoon Friends and welcome. Thank you for stopping by last week for my review of Domina Alexandra‘s ‘A Night Claimed.’ Today author Julie Forester is here to talk about her new book that just debuted, ‘Marmalade Martini.’ I had the chance to read this awesome story and know you are going to love it as much as I did.

THE BEGINNING
You know how life takes you on its intricate pathway of experiences and discovery? For me, one such life-changing series of events lead me to stop, take stock and reflect on a few goals and priorities in my life.
I’d seen this happen to other people, but when it happened to me, it was truly my literary epiphany!

Even before this point, and for as long as I can remember, writing was something I always did – either for pleasure through the musings of a would-be fledgling author, or professionally through my background in education.

The upshot to this preamble? Well, to cut a long story short, about five years ago, my debut novel, MARMALADE MARTINI was conceived.

MARMALADE MARTINI
Even before the title was decided, I knew exactly how the story would begin and end. An unconventional approach? Perhaps. But the fact was, I had penned my very first and final paragraphs before I had any notion of how the story would unravel.

Crucially (and fatally) I was already emotionally involved with my main character, Jamie Barker. She lived and worked in London UK, so my frequent social visits to the capital enabled me to become familiar with her world. I discovered where she drank, where she lived, where she worked and she even started to introduce me to her circle of friends. As soon as I discovered that Jamie has a story to tell, I knew that I needed to tell it for her!
Manuscript written, I ventured to dip my toes into the big wide world of fiction publication! It was the best feeling ever, when (my now) literary editor told me, ‘You know, you’ve got something

AMELIE
As often happens in novels, the characters (both humans and other animals 😉) usually have their personalities / characteristics attributed in some way to real life. In MARMALADE MARTINI, Jamie Barker’s cat, Amelie, is one such example. 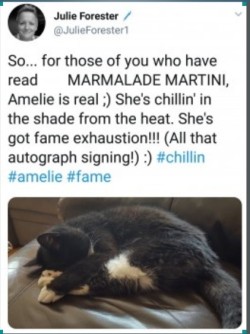 I was amused when one blogger wrote, as part of her review: ‘She (Jamie) has an adorable rag doll cat named Amelie, which frankly, is my dream cat. And of which, I wish there more of her in the story.’ 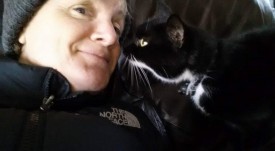 ROCK & RHUBARB – THE SEQUEL
As I wrote MARMALADE MARTINI, and the twists and turns of the narrative peeled away, I realised that a sequel was brewing! The loose ends and unanswered questions were utterly deliberate. I wanted to dangle the carrot on the stick, step back and see what the audience wanted.

Thankfully, following the success of the first book (and prompted by fantastic reviews and reader-demand) I am currently embarking on the sequel – ROCK & RHUBARB.

This time, ROCK & RHUBARB is set, not in London, but on the south coast, Brighton UK. Jamie and familiar faces are joined by new characters, where the doors to Alchemy Cocktail Bar will be opened for one last time.

FUTURE WRITING?
Already, new ideas and characters are bubbling in the melting pot of my imagination. I’m really excited to see what happens next!

Available in Kindle and Paperback, and coming soon to Audible.

Does this sound like a good story or what? For more on Marmalade Martini, read the review I posted on 09-Mar-19.

My Review of ‘Marmalade Martini’

Thank you, Julie, for sharing with us. Be sure to stop by next week when I’ll be presenting my review for ‘It’s All Coming Back to Me‘ by Michelle Marra.