Good afternoon Friends and welcome. I hope you all enjoyed a nice Thanksgiving. We went to visit our family and had a blast. It was great seeing everyone and I’m feeling a lot of gratitude. Things are going well and I wanted to share with you another promo for my book, ‘Awakened by Fate.’

A lot goes into the making of a good book. In my case, it took several years. I am currently working on a few other manuscripts. Writing the story is the easy part. The hard part is editing and moving things around. I like to have the story in good shape before I send it off to the beta readers. Then they have their own notes I follow. You have to make sure everything ties together and there are no plot holes. It is easy to put in a minor character and then forget about them. That’s why it is so important to have an outline or two handy, to keep me on track.

Jackie is an interesting character in that she is so self-absorbed she doesn’t see what is going on around her. She thinks she’s doing a good job at work, at least until a rush comes in, then she doesn’t fare so well. She is walking along a path that leads to nowhere.

In the book, I go into greater details about her relationships with others. There is one woman that Jackie can’t upset. Out of jealousy and worried about losing her job, Jackie sets out to sabotage her new co-worker.

She thinks she has her life in order, but can’t see the flaws in it at least she ignores the signs. A big disappointment happens and she still doesn’t see the truth.

It is interesting regarding Jackie’s choice of lovers, including one whom she got caught with. I chose for her to have a platonic relationship with her husband for this part of the story. He is gone a lot, but one has to wonder whether or not he is choosing to go on these assignments since their relationship draws out the worst in both of them.

Along the way, Jackie meets up with others who are able to be supportive of her as she goes through her change. Even still, she has her own ideas.

At the beginning of the story, Jackie has an estranged relationship with her family and has issues regarding them. Here she has a golden opportunity to clear up the tangled strands. But it isn’t easy and some things go unsaid that should be spoken.

I chose a complicated character because wanted her to have a bumpy ride before she realizes who she really is.

Here is another exciting excerpt from this story:

“Welcome to the big league, Jackie.”

“Yes. Lisa is such a genius with her work. If it’s okay with you I’d like to take some of your flyers and post them around town and pass out at my next gig. What do you say?”

Giving her a hug, Trish said, “That’s my girl. Don’t be surprised when the phone calls start coming in. What do you say we spend some time tonight working on affirmations that you can post around your condo to remind you when you’re feeling off balance?”

Jackie went to the office and returned with a pen and notebook. She and Trish stayed up to all hours of the night working. By the time they went to bed, Jackie passed out.

The gentle breeze brushed up against her cheek and the scent of pine and aspen was in the air. Looking around, Jackie saw that she was in a lush, breathtaking forest. The sun shone down through the trees, making the dew on the grass glisten. The wind whistled a soft song. In the distance, she saw a deer that turned to look at her. He stood still for a brief minute, but when she moved her hand, he turned and ran away.

She continued walking until she came to a small, grassy clearing. She lay down in the thick carpet and closed her eyes. For several minutes, she breathed in the clean, crisp air and allowed her mind to just wander. The sun felt warm, beating down on her face, and she allowed herself to soak up the rays.

The sound of a twig snapping caused her to freeze up. Panic overcame her as she sat up. Then in the distance, she saw two very tall women with long, flaxen, hair, sparkling blue eyes, and a healthy glow from their faces, standing next to a large aspen tree.

Jackie stood up and started walking towards them. They continued to stay put, as if they were waiting for her.

The woman on the left replied, “Yes, you do. We have been with you on your current journey and are here to check in with you. How are you doing, Jackie?”

Puzzled, she looked hard at the two of them and thought. Then she spoke. “What do you mean by my current journey?”

“Your current incarnation. We are here to guide you as you walk through your life. You called us here at this time because you needed our assistance.”

“You appear to be at a crossroads with several aspects in your life and are confused about which path to take. We cannot tell you which one to follow, but we can tell you that you will soon find the answer. You will need to go to a sacred place to receive it.”

Jackie replied in a huffy tone, “And where do I need to go to receive this message?”

“Ask Trish and she will take you there.”

“What do you mean ask Trish? What does she have to do with this?”

“Just trust what we are telling you. When you go to this place, go deep inside and the answer will come to you.”

A minute later, both women disappeared into the air and Jackie was left alone, standing in the forest. Without another thought she closed her eyes for a minute. When she opened them, she saw a fox sitting in the exact spot where the two women had been standing. Jackie stood there for several moments staring at the animal until he, too, disappeared.

The second she woke, she wrote down what she remembered from her dream. Looking over, she saw a peaceful looking Trish lying next to her, breathing softly. Quietly, she stole out to the kitchen to make some coffee. The morning sun was inviting, so she went out on the balcony to absorb the rays of sunshine.

About twenty minutes later, Trish appeared in the doorway with a cup of joe in her hand. Smiling, she said, “You look radiant today.”

Trish sat down. Pointing at her notebook, she said, “Anything interesting come to you recently?”

“Oh, my. I had this weird dream last night,” she went into details of it.

Grasping her hands, Trish widened her eyes and said, “Hey, that is amazing! These two women are your spirit guides. It sounds like they want you to get out into nature. I know of a wonderful place that’s not too far away where we can go hiking sometime if you’re up for it. The best time to go is in the early morning when the sun is rising.”

“What do you think they are saying? I don’t get their secret.”

“You are definitely ready for this phase of your life. It sounds like the women want to show you something. Now that I think of it, I know of an even better place I can take you for a nature walk.”

“Let me take care of the details.”

Around Trish’s neck was her fox medallion. Jackie’s heart skipped a beat. Trish looked down and smiled. Then she took it off and put it around Jackie’s neck and kissed it. “Allow good things to manifest.”

Thank you for stopping by today and thanks so much for all your support with ‘Awakened by Fate.’ Be sure to stop by next week when I’ll be featuring my review for Suzie Carr‘s ‘The Curvy Side of Life.’

One thought on “Awakened by Fate” 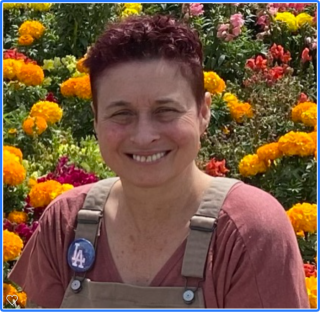 Lynn Lawler‘s stories are greatly inspired by LGBTQ themes with deep felt emotion and rich characters. Each lives out their dynamic lives and find themselves in the rich imaginations of those who love to read and receive fulfillment within their own creative desires. While in college, she wrote an editorial that was published in The Detroit Free Press. It focused on the positives of children’s education in the sciences. This she found to be very inspiring and felt that people needed awareness to encourage young people to study these subjects. Lynn went on a journey to Arizona seeking a refreshed higher purpose. While there, she experienced things that were life-changing. By sharing nutritional information and benefits of going vegetarian, Lynn walked right into an opportunity where she created a new profit center for a co-op market by introducing a juice bar. In another venture, she applied her expertise in developing a marketing strategy for a professional outdoor sales - small business. In addition to marketing, Lynn also was an architectural designer, consulting and contracting for many Los Angeles, CA-based architectural firms. Her creative awakening began after low spot emotionally. She finally realized that her true, lifelong dream of being a writer could and would become her reality. Lynn watched a documentary on the life of the 20th century, writer Willa Cather. Willa Cather became her encouragement to move forward with her own aspirations. The trials of Lynn’s life have only served as stepping stones to a brighter outlook and a stronger spirit. Lynn has always been a fan of books. Her favorite authors are; Mary Higgins Clark, and J.K. Rowling and Judy Blume. In addition, she loves reading the works of other LGBTQ authors. You can find Lynn Lawler’s blog at www.lynnlawler.blog. Here you will read interviews of artists, authors, and others. In addition, you can read all of Lynn Lawler’s book reviews for a relevant, insightful, point of view. In her spare time, she enjoys hiking, meditation, playing chess and Tomb Raider, and watching baseball. Lynn lives in SoCal with her wife and cats. She is currently at work on her next two novels. Feel free to follow her on FB and Twitter (@lynnlawler1).