Good afternoon friends. Welcome to the Christmas blog blast for Samantha Jacobey’s ‘Christmas Candy.’ I am very excited to share my review so come on in and join in with the fun.  Enjoy! 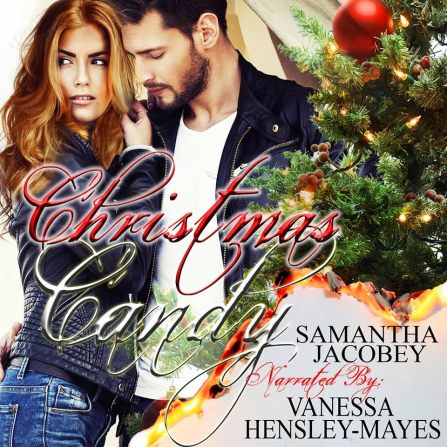 Christmas is nearing and our main character, Candy is doing her best with her challenged young son.   Motherhood is natural for her and her sincerity is clearly shown.  She goes out of her way for him and puts him first.

Candy knows what she wants and isn’t afraid to go after it, and get her way.  She is a little spicy, and a real character.  Her strong traits came out several times during the story.  I found it refreshing to see her speak her mind and stand her ground.  She takes care of herself.

On the sidelines stands her love interest.  However she won’t allow herself to pursue him because of a deep seated grief from a loss in her past.  Trust issues come up, creating fear in her.  She wants to break free, but at the same time is keeping herself prisoner.  But for how long?

Life throws her a curveball during the midst and she is forced to surrender some of her self-sufficiency and allow others to help. By humbling herself she is able to process her feelings.  While reading this fiery, committed, chase, you’ll be dying to know what happens next.  Very well done!

This read makes a great stocking stuffer and can be finished in about two hours. The pace is fast so I found myself backtracking a few times just so I wouldn’t miss out on anything important.  The story is easy to follow.  Each scene is described in such a way that I felt part of it.  I am recommending this book for you all!

Scroll down to read more about ‘Christmas Candy’.   I have included an audio and a text excerpt. 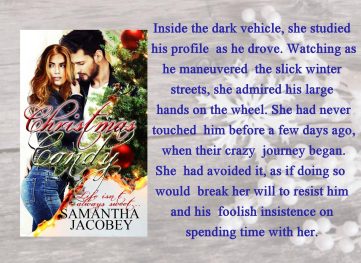 Here is excerpt #1.  It is an audio file from ‘Christmas Candy’.

Take a listen to the audio file

Here is excerpt #2 from ‘Christmas Candy’.

Swinging around to face her, he towered above her short frame. Catching her hair, he tugged on it playfully while bending his face down close to hers. “Do you have any idea what you do to me?” he blurted, his smile tantalizing.

Staring at him in wide-eyed surprise, she demanded, “I thought you were going to stop pushing me to date you!”

“I’m not pushing, and this isn’t a date,” his lips made contact, but only for a brief moment. Stepping back, he caught her hand and pushed the button to call for the elevator at the same time.

Holding him nervously, Candice followed him into the cubicle, and waited for the doors to close. Once they were alone in the small space, she pulled at his arm and teased, “You make it really hard to trust you.”

“Only keeping you on your toes,” he shot back while staring up at the ceiling.

“Maybe,” the doors parted and they exited together.